Are you in a disquiet because you are unable to choose between Razer Seiren and Blue Yeti? Both products are heavily popular USB microphones available on the market. In general, the two are considered to be from the same price range, as you can get either of them with a budget under two hundred bucks, but you may want to know that Razer Serien is usually a little bit pricier than Blue Yeti. Both Razer Seiren and Blue Yeti are considered high-quality, suitable for a variety of purposes, from mobile recording to game streaming. So, how do they actually compare to each other? Which is the one that you should choose? Let’s see the comparisons! 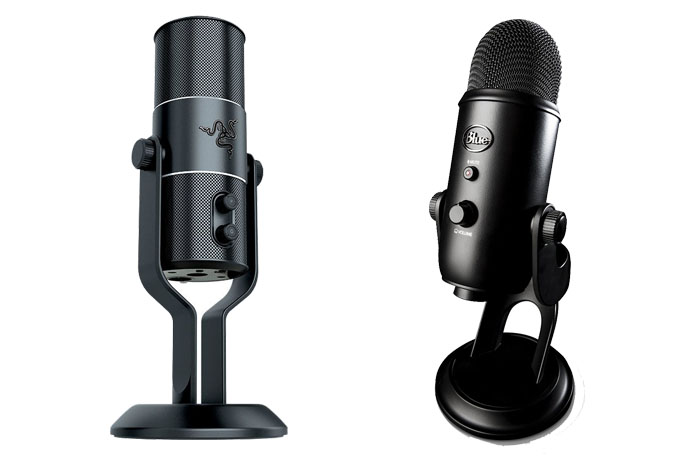 Design and Feature
Quite interestingly, both models come with some similar design and features. Both mics, of course, connect to a computer device via USB. Both are plug-and-play devices, which means that the two can work with your computer right away without needing you to configure any confusing driver software. Each also has a zero-latency headphone output jack for direct monitoring, which is important if you want to have the utmost control and precision over the recording. (See also: Razer Seiren Vs Razer Seiren Pro)

Both Razer Seiren and Blue Yeti feature multiple polar patterns. They both can be configured to be cardioid, bidirectional, omnidirectional, or stereo, making these mics very flexible and versatile for various purposes and conditions. The internal components are also similar, as they each is powered by three 14 mm condenser capsules to do the job.

Razer Seiren comes with dedicated headphone volume control and mic gain control, allowing you to adjust the volume level of your monitoring without altering the actual input level. In addition, there is the Razer Synapse app, through which you can furtherly adjust and customize the mic. On the other hand, Blue Yeti also features a gain control, but has no dedicated headphone volume control. Instead, it features a mute button, which can be very handy for starting and stopping your recording.

Performance and Output Quality
Even though there are quite some similarities between the two products, they are quite different in terms of performance and output quality. Multiple tests have shown that Razer Seiren has better sensitivity and tonal accuracy than Blue Yeti. They both have a frequency response range of 20 Hz – 20 kHz, also a maximum SPL handling of 120 dB with 0.5% THD at 1 kHz. However, compared to Blue Yeti, Razer Seiren captures fuller, more accurate, and more detailed sounds. Lows are defined more properly, while the mids and highs are crisp and clear.

Conclusion
All in all, Razer Seiren makes the best way to go. The primary reason, of course, the better audio quality. The controllability it offers is also excellent, while the Razer Synapse app becomes a nice plus point.